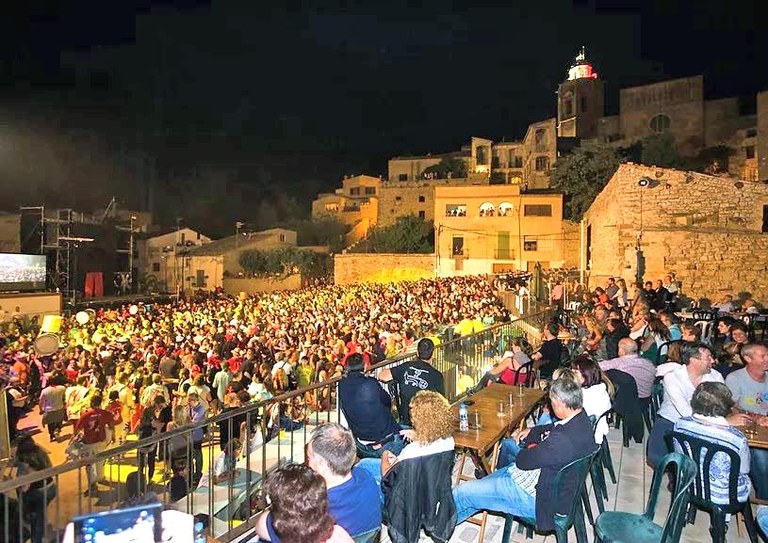 It is located on a terrace around the old convent of Sant Pere Màrtir, popularly known as Sant Domènec. The House has a bar service.

The capacity is limited to a maximum of 230 persones i les entrades es poden comprar en línia clicant here, or they can also be purchased at the Gran Boc Fair, The festive program presents this year as a novelty the performances of the groups from Cervera Fadunito and Lasta Sanco 27 d'agost, from 10 a 2 of noon, and 5 a 8 in the afternoon. 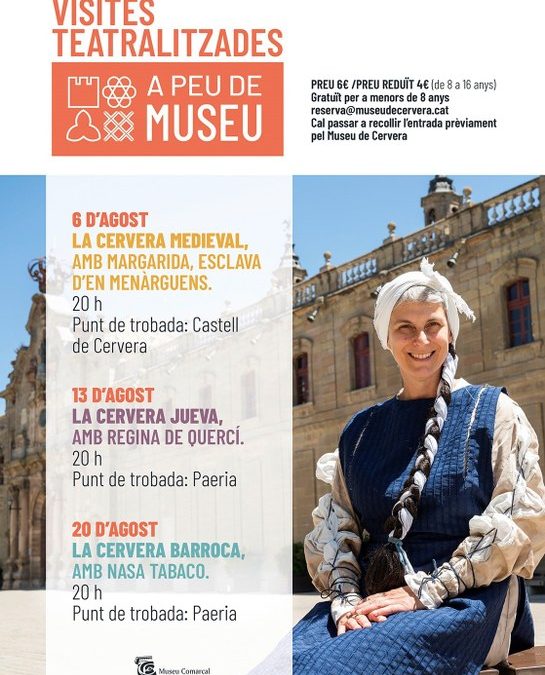 The dramatized visits invite you to follow the journey of the commissions through the main street by the hand of Margarida d’en Menàrguens (the medieval Cervera, he 6 d'agost); to learn about the social renunciations to which Regina is forced as the widow of Issach de Quercí (the Jewish Beer, he 13 d'agost); and experience the beginning of the academic year at the University with the taverna Nasa Tabaco (the baroque Cervera, he 20 d'agost). 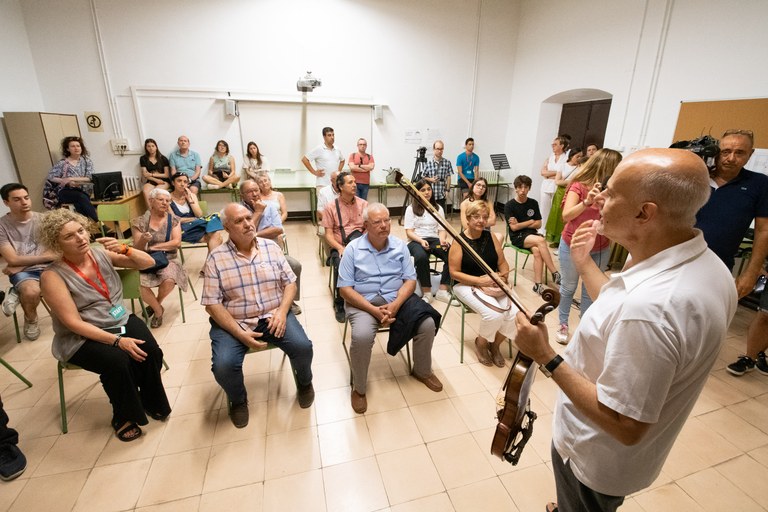 Cervera becomes the epicenter of the luthier world

The Cátedra Cervera Emili Pujol hosts the most important fair competition in southern Europe dedicated to this specialty with 9 workshops and dozens of professionals in the sector. A J.B. violin is on display. voillaume of the 1829, an instrument of great value that participated in the soundtrack of pel·movies like "Casablanca", "Psychosis" or "Gone with the Wind", among many others.

Cervera was converted this Wednesday, 20 July, in the epicenter of the luthier world in southern Europe.

The Luthiers Fair, which takes place every year as part of the Emili Pujol Chair, has gathered in the Corridors of the University until 9 houses of luthier craftsmen, as well as dozens of professionals in this sector.

Among many high value instruments, in this 18th edition, a J.B. Vuillaume violin of the year was exhibited there 1829. an instrument, valued at 300.000 euros, which has had a special singularity after it was stolen and, subsequently, recovered in the Raval of Barcelona.

The violin had belonged to violinist Ansaldo Poggio or Louis Kaufman, which participated in the recording of 400 movie soundtracks·movies like "Casablanca", "Psychosis" or "Gone with the Wind". currently, belongs to Corrado Bolsi, Course teacher, and that he will participate with this violin in the concert dedicated to the Fira de Lutiers that will take place as part of the Festival.

As part of this fair, them 16 hours, there will be a round table on "The Figure of J.B. Vuillaume" by Blandine Galy and Corrado Bolsi.

The International Music Festival fills all the towns

Since its launch last Saturday, 16 July, the concerts scheduled at the International Music Festival, they are being very well received. All performances are selling out all available seats, which demonstrates the interest of the public to enjoy this cultural initiative again after the restrictions of the pandemic.

This Wednesday at 22 hours will take place the concert dedicated to the Lutiers Fair. Corrado Bolsi and Miquel Muñiz will participate, on the violin; Ulrike Haller, with soprano and Manel Valdivieso, in the direction. One of the curiosities is that throughout this concert, Bolsi will play with the J.B. Vuillaume violin on display throughout the day at the fair.

The Festival has scheduled a total of 12 concerts that bring music to different venues in Cervera del 16 al 25 July. 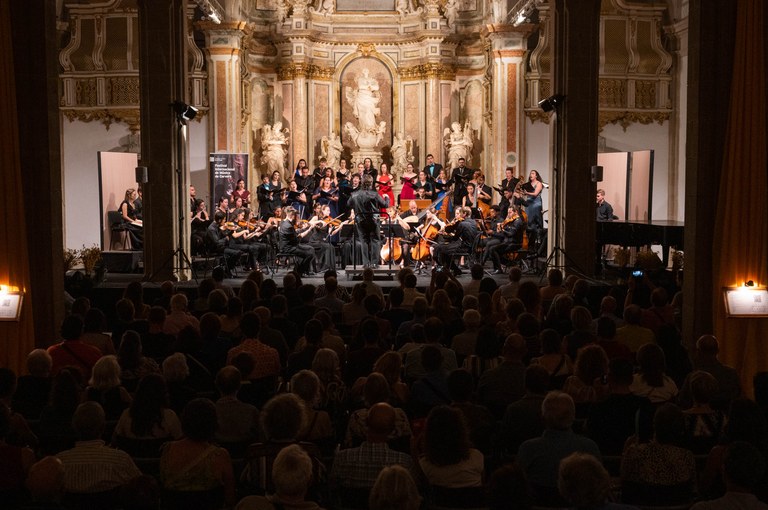 Absolute plenary session on the first day of the Cervera International Music Festival. more 300 people sold out all available seats for this inaugural concert, which was conducted by the Jove Orquestra Nacional de Catalunya and the Cor Jove, which were directed by Manuel Valdivieso.

This way, The 41st edition of this event was opened, which will host a total of 12 concerts, distributed in several spaces of Cervera, with different formats and styles. This Sunday, 17 July, it will be the guitarist's turn, Anders Clemens, who will perform in the Auditorium at 19 hours. Under the program “Guitar, tradition and modernity ”, we can listen to works by Ferran Sor, Alexandre Tansman, Marco Smaili, Maria Camahort or Ramon Humet.

This way, the corridors of the University of Cervera are already full of students, some of them from various parts of Spain and countries such as Germany, Ireland or the Regne Unit. 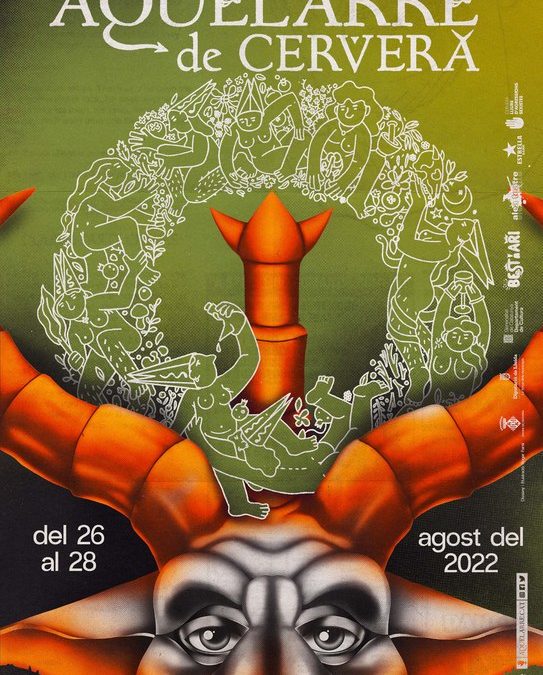 Of the 26 al 28 d'agost, Cervera will once again become the capital of fire, music and witches, with a new edition of the Aquelarre that returns with all the events after the limitations of the pandemic in the last two years. The central axes of the party will revolve around the Meeting of Fire Beasts of Catalonia, the correfocs, the Great Goat Fair, l’Aquelarret, the Band Tokades show, and the long-awaited appearance of the Male Goat that will fill Cervera with fire, music, show and tradition Saturday night.

The organization has already made public this year's Aquelarre poster, which evokes a party more alive and complete than ever, after stopping the 2020 and the reduced version of the 2021.

With the involvement of entities and professionals from Cervera, The Paeria has managed to reactivate an Aquelarre that will arrive with some news, as a change of spaces or more activities of the fair, which will be presented shortly when all the details have been finalized.

Aquelarre was born in 1978 and has been held every year since, uninterruptedly, except for the 2020. The party arrives this year, so, in its 44th edition, as a landmark of fire and music.

The Aquelarre poster 2022, designed by the young brewer Roger Farré, puts the focus on the witches, historically wise women who mastered medicinal plants to cure diseases. For that, at the top of the poster you can see how they are offering all kinds of herbs and plants that we can find in La Segarra. They are represented as women empowered and with a sexual freedom that is contrasted with the phallic horn·lica of the male remaining in the background, contemplative, staring at the viewer.

The poster includes various references to art, like the hats of witches that resemble those represented by Goya in “The flight of witches”, the encumbered postures of “Witches going to the Sabbath” by Ricardo Falero, or the sexual practice of “the cursed woman” by Nicolas Francois Octave Tassaert.

As for the colors, an olive green background has been used which represents the most natural part of folk medicine and contrasts with the gradient of oranges and reds of the male, which evoke the light of the correfoc. 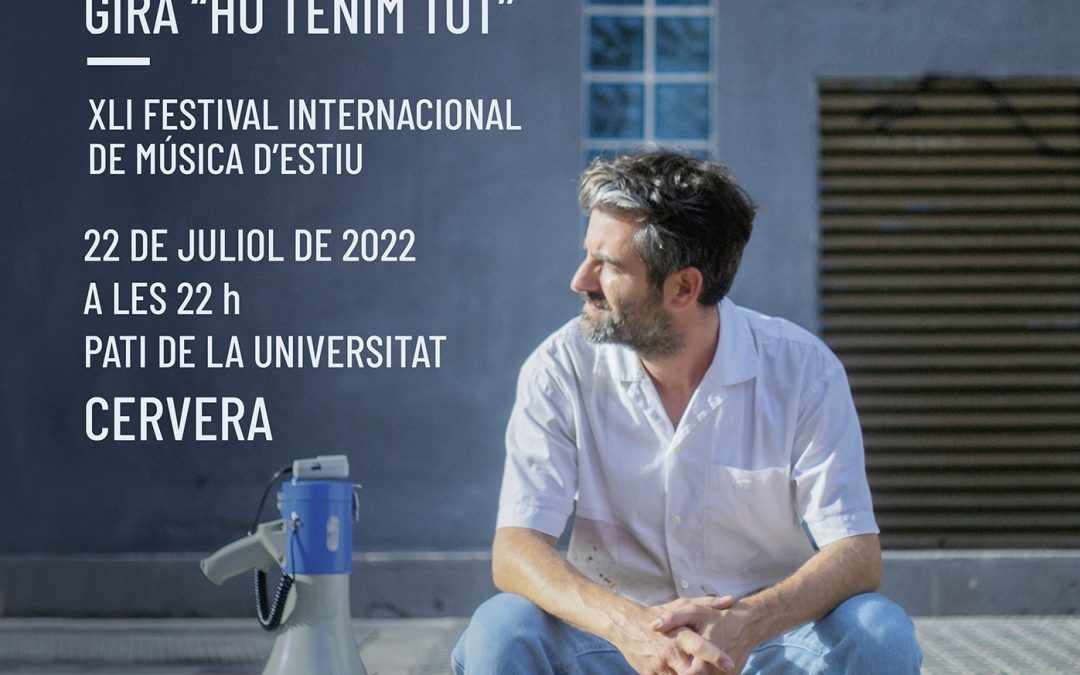 Joan Dausà will perform at the Cervera International Music Festival

The Department of Culture of the Paeria col·works this year with the International Music Festival programming a concert by Joan Dausà, who will perform for the first time in Cervera, and will do so as part of his "We have it all" tour.

It will be the presentation in Terres de Lleida of the new album “We have it all”.

The concert is on Friday 22 July, them 22 hours, in the courtyards of the University.

Tickets can be purchased in this link.

He was born 1981, the Cervera International Music Festival consolidates year after year. A poster with prestigious performers and the zeal of the artistic direction in the research stand out, knowledge and combination of musical styles and formations.

The Festival wraps the city of Cervera with numerous solo concerts, of chamber, of cobla, band, choral groups and symphony orchestras.

This year it will kick off on Saturday 16 of July and will end on Sunday 24 July.

Concert of the tour "We have everything" by Joan Dausà

As a differentiating feature from other concerts, from the Paeria is committed to programming a singer like Joan Dausà, which returns, after three years of record silence, with a new record under his arm, "We Have It All".
This is a vital and optimistic record that definitively enshrines the musician from Sant Feliu de Llobregat.

The previous tour was a giant step forward for Joan Dausà’s career . He entered the country's major festivals and stage venues by running out of tickets wherever he performed. He composed and sang the song for the Estrella Damm ad and incorporated two more songs into the great hits of Catalan music such as The Great Euphoria i Everything will be fine.