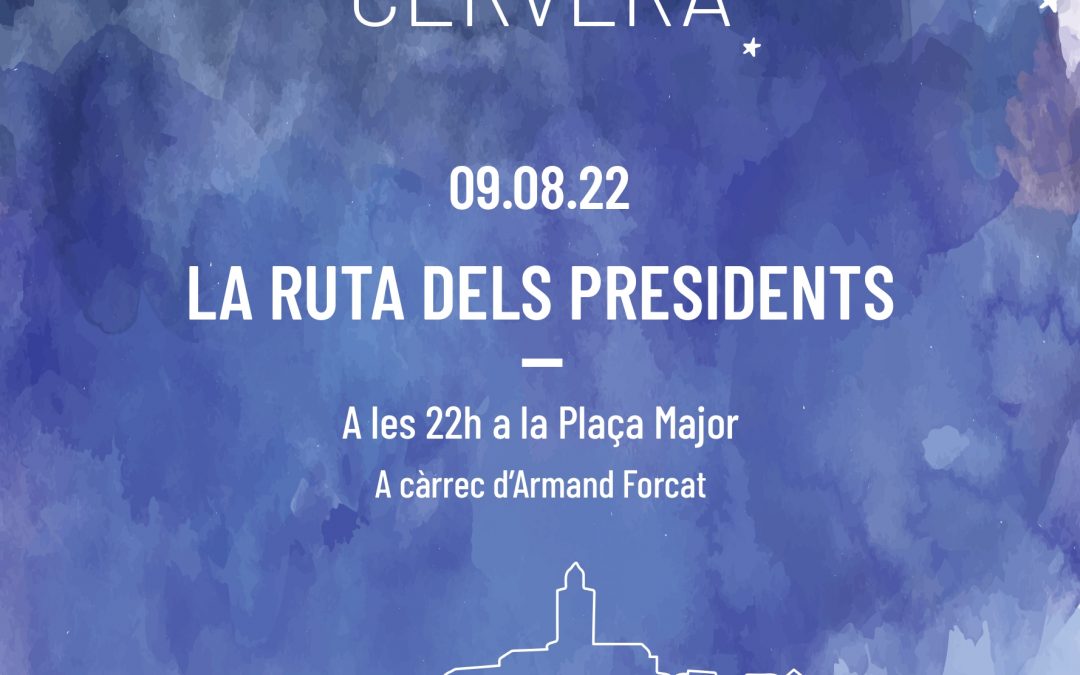 This summer the guided night tours organized by Tourism are back, from the Paeria de Cervera.

This year there will be a single night visit by guide Armand Forcat, on Tuesday 9 of August at 10 of the night. On this occasion the visit is by title The route of the presidents, with which you can enjoy an evening full of curiosities and interesting facts about this topic.

However, the day 23 In August, a theatrical visit will also take place 2/4 from 9 of the evening, titled walls, wizards and alleys. 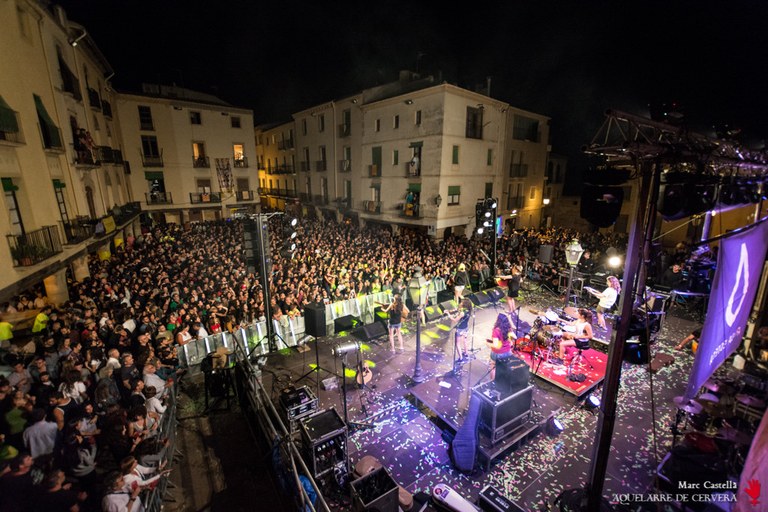 The Aquelarre de Cervera, which will take place 26 al 28 d'agost, completes its fire and tradition shows with a powerful musical offer, which includes groups already with a track record and projection (com Balkan Paradise o Gatibu) but which also recovers the spirit of giving voice to young or emerging groups of quality that are making a place in the market.

There will be 8 concentrated concerts in Plaça Major and Cal Racó, techno space in the Wall, dance in Plaça Santa Anna, and an uninterrupted offer of music and activities at the Fossar throughout Saturday and until Sunday morning. Access will be free to all performances.

The musical poster has been chosen by the music working group of the Aquelarre Advisory Council, in which members of almost all the entities represented on the Advisory Board have participated. The aim is to offer a powerful program to provide a stage for quality groups, some of which are making their way into the music industry, most of them coming from Catalonia, but also from the Valencian Country and the Basque Country. It should also be noted that the vast majority of formations that will perform have female components, with the aim of making women visible in the music scene.

The schedule is as follows:

In the Main Square:

In the Main Square:

On Saturday, the techno space in la Muralla will also be held with the performances of:

There will be dancing in Plaça Santa Anna, them 00.30 with Duo Original Version, and the Fossar will be reopened with the Kimera Reggae Space, with musical performances and other activities from 12 from noon until 6 of the morning.

Here is the link to a video clip of the beer group The Pink Goats, who will perform at this year's Aquelarre, in which you can see his last performance at the prepandemic Aquelarre of 2019:

The Gran Boc Fair is back, with the space exhausted and more activities than ever

The Gran Boc Fair, with 22 years of history, returns this year with more force than ever to the Aquelarrre de Cervera. Throughout the weekend, day 27 i 28 d'agost, 85 stops will fill the four spaces, accompanied by a total of 23 activities, que la consoliden com una fira de referència en l’àmbit esotèric. 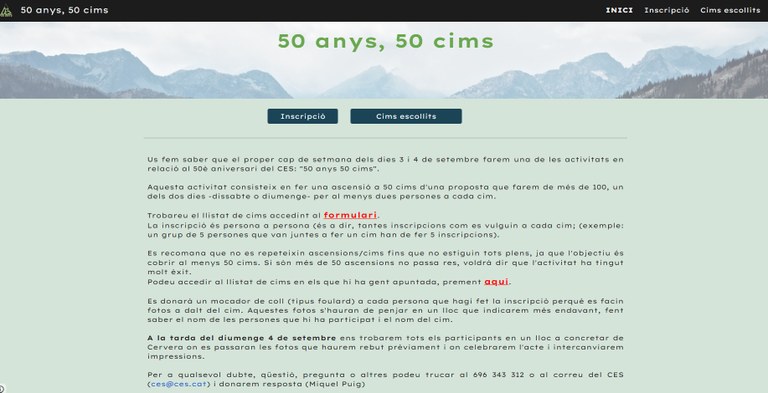 The Excursionist Center of La Segarra (THOSE) celebrates its 50th anniversary this year 2022 and to commemorate it organizes different activities, among which “50 years, 50 peaks”, scheduled for days 3 i 4 September.

Per a qualsevol dubte us podeu adreçar al correu ces@ces.cat. 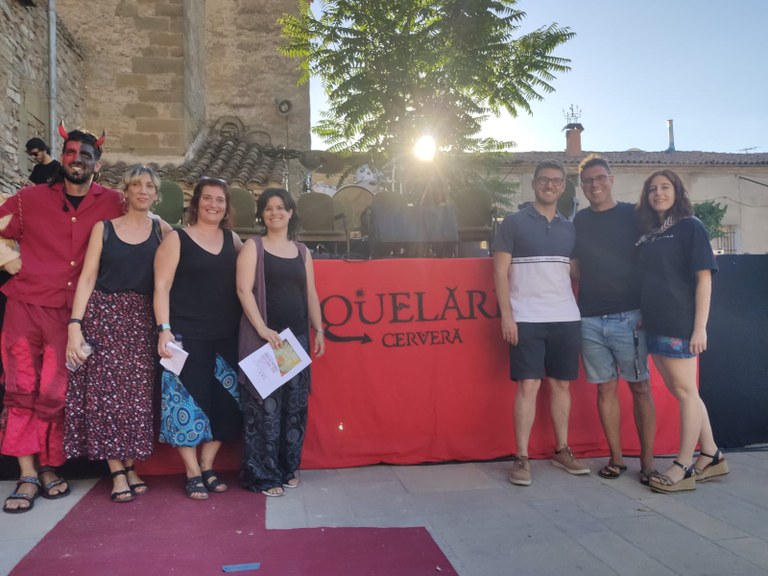 The Aquelarre de Cervera 2022 presents the program and the news

The popular Aquelarre festival, which reaches its 44th edition today 26, 27 i 28 d'agost, was presented on Tuesday 26 of July with an event open to the public on the balcony of Sant Domènec.

Witches and devils, parades of fire, music, a great esoteric fair, shows, the Aquelarret for the little ones…
In every corner of Cervera hides a legend starring a mysterious and disturbing Mascle Cabró, its long-awaited run and a fascinating show that fills the city with tradition. The economic impact of the Aquelarre for the city is almost 1 million euros, they are waiting there 30.000 people all weekend and they will burn some 360 kilos of pyrotechnic material.

The Aquelarre Council has renewed the sponsorship contract with the company Estrella Damm for the next three editions of the Aquelarre. The party, which has a budget of 181.000 euros, also has col·collaboration of the Generalitat de Catalunya and the Diputació de Lleida.

Tuesday 26 July the public presentation of this year's edition was made, in which the councilor of Aquelarre, Mireia Brandon, “celebrated the return of the street party, to its popular spirit” and emphasized that “all events will be free and that, musically, l'Aquelarre wants to be a stage for emerging groups that are making their way in the music market”.
After the presentation, in which several organizing entities participated, it was the turn of the Cerver group The Pink Goats.

MEETING OF FIRE BEASTS TO GIVE THE STARTING SHOT
Aquelarre will kick off on Friday 26 of July with the Meeting of fire beasts, that this year they will have in common that all the participants have 2 The 3 caps. The bestiary will be planted in Plaça Universitat at 7 in the afternoon. And at 11 the parade will begin that will go to the main square, with La Tarasca de Cervera, the Dragon of Vilanova and Geltrú, Dragon of the Monks, Ribes' three-headed dragon, Dragon Hydracus de Jesús and our Carranco Bilando to the Plaza Mayor where the dances and performances will take place.

THE CENTRAL SHOW OF THE AQUELARRE DE CERVERA 2022
The central show of this year's edition of Aquelarre, directed by Albert Parra, director of Alea Teatre-, is inspired by Ragnarök, the cataclysmic battle between the forces of chaos and order in Norse mythology, which ends the world and kills most of the gods and their adversaries, giving rise to the birth of a new world.
The Aquelarre 2022 will take place on Friday 26 from August to Sunday 28, Saturday being the great night of the party with the magical ritual of the ferocious invocation of the Male Goat in the old town of Cervera. Will be, as always, an infernal show that will transform the capital of La Segarra into a world of fire and legend.

THE INVOCATION OF THE MALE BASTARD
Evil beasts come out of hell and settle in·in the city to give life to the Aquelarre de Cervera. The magic and originality of the party is centered on the Male Goat, protagonist of a dramaturgy that is designed anew every year, following the University's ignition protocol, the ball of the cock, the invocation of the Goat, the Mascle Cabró runoff and the Foqueral.
The introduction starts with the Cervera University Ignition that opens the party at 23.00 h with a show with fire and pyrotechnics on the facade of the historic building. Then, a large parade begins that reaches Cal Racó and is characterized by a parade of the Diables de Cervera Carranquers, and by a bunch of invited devils, and a descent with the participating beer organizations.

The first act starts at 00.15 h and takes place in this central space and is Cervera Carranquers' Devils' Cock Dance. The second act is the Invocation and Apparition of the Male Goat and the Dance of Devils. I, to finish, the third act is Escorreguda del Mascle Cabró, the culmination of the party and the most awaited moment for everyone. It is a catharsis col·lesson enhanced with pyrotechnics to the rhythm of musicians and actors from Cervera. Well into the morning, the end of the crazy celebration comes with the Foqueral, a wheelbarrow where the level of fire increases steadily and gradually, all concluding with a spectacular joint lighting of all the devils and the big clubs: in Lucifer and the Devil.

GRAN BOC FAIR
Located in the courtyards of the University of Cervera during the day 26, 27 i 28 d'agost, Esoteric is one of the most important fairs in southern Europe, an alternative space during the days of the party. This year celebrates its XXIII edition, directed by the cerverín Óscar Celeiro, with a full resumption of activities after two years without taking place following the pandemic. Throughout the weekend, a total of 23 activities, between conferences, workshops and concerts, making this the edition with more on offer in its history. They will accompany the activities 85 stands, distributed among the craft spaces, esotericism, therapies and nutrition. Besides, as a novelty, a lunch will be promoted in Plaça Universitat, during noon on Saturday, in order to maintain a continuity of activities until the night. The Gran Boc Fair will be open on Saturday 10.00 a 14.00 and 17.00 a 02.00 h. And Sunday, from 17.00 a 22.00 h. There will be gastronomic spaces in Plaça Universitat and Rambla Lluís Sanpere.

THE SAME
L'Aquelarret is the children's parade and has been part of the official events since 1998. On Saturday 27 in August the parade will take place, which will start at 6 in the afternoon, and in which the boys and girls from the workshops that will have been held previously will participate, the children's gang of the Bombollers percussion group, the Tarasca of Cervera, the Cervera Devils' Ball "Carranquers" children's group, the Torredembarra Children's Devil's Ball, the Vibrieta of Tarragona and the Group of Giants and Grallers of Cervera. The departure will be from Plaça Universitat this year as well, as a novelty, will go to Plaça Major, following a route much more similar to that of Saturday's Aquelarre.

A 2/4 from 8 Aquelarret will arrive at the Plaça Major where he will be received by Astarot Junior, and there will be the performances of the different groups and the final foaming. At that point, also as a novelty, there will be a show by the Theater School of Cervera "La Caserna", led by cerverín David Mora.

THE MUSIC OFFER
L'Aquelarre completes its fire and magic shows with an interesting musical offer, that this year the spirit of giving a voice especially to emerging groups from the Catalan Countries that are gaining a place in the market is being recovered. The musical poster has been chosen by a music working group of the Aquelarre Advisory Council, where there were members of almost all the entities represented on the Advisory Council.

The techno space in the Wall will also be maintained, the dance in Plaça Santa Anna and the Fossar reopens with the Kimera Space, a DJ area.

THE MOST FEMININE ONE
For the 15th year, the Band Tokades will be in charge of claiming the most feminine Aquelarre, with "Entraya", Aquelarre's Friday show, which can be seen in the main square, them 00.30 h. In the popular imagination, tribes reflect a primordial social structure from which all subsequent civilizations and states have developed. Per a Band Tokades, the tribe is a recognition among the members, a safe space for one's own identity, a sense of belonging, empowerment and freedom. A music show, fire and dance.

THE ENTITIES, INDISPENSABLE
As usual, this party could not take place without the beer organizations that col·they work and help make Aquelarre a unique event. input, the protagonists of the fire since 25 years, the Cervera Carranquers gang of devils, which this year will be accompanied by the Balls de diables de Torredembarra and Esplugues de Llobregat. A global, in the acts of fire some will be burned 360 kilos of pyrotechnic material.

The magic and originality of the collection lies in Aquelarre·operation of Cervera, organized in groups and associations, intense manifestation of cultural associations that brings together hundreds of volunteers. From the Colla de diables de Cervera Carranquers, up to the Giants, the Bombollers percussion bands, the female group Band Tokades, the local theater group Grepp Teatre, the professionals of Alea Teatre, Fadunito and the Theater School of Cervera La Caserna or La Tarasca.

All the information about the party at www.aquelarre.cat.

The Passion of Cervera, present a Europassion

after the pandemic shutdown.