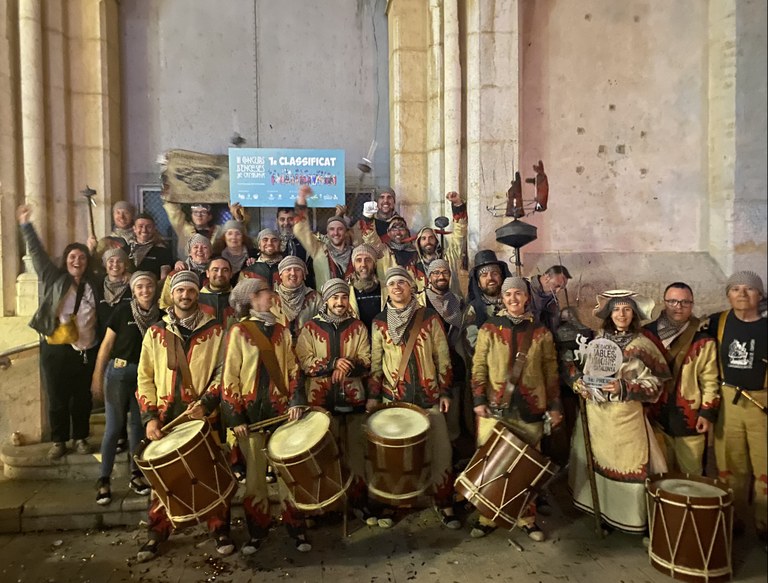 The Ball de Diables by Cervera Carranquers won the III Catalan Lighting Competition, he 14 May in Sant Pere de Ribes. This annual meeting is jointly organized by the Federation of Devils and Demons of Catalonia and the host group, this year's Ribes Colla Jove Devil's Dance.

After 2 years without competition for the pandemic, this year he returned to the load with a full day of events throughout the day.
In the afternoon, the drummers of the Carranquers and all the other participating groups took part in a traveling drumming through the streets of Sant Pere de Ribes, while warming up engines for the night.

The contest had 14 participating groups, which made two lightings each. three works will be offered with values ​​that invite the reflection of students of all ages, with pyrotechnics that the organization assigned to each of them by lottery at the same time. And the second, a light that each gang carried from home.
A specialized jury evaluated several elements of each ignition, such as coordination between participants, the rhythm and coordination of the drummers or the combination of pyrotechnics.

The first prize was awarded to the Cervera Carranquers Devil's Dance; the second, at the Ball de Diables in Caldes de Montbui; and the third, in the Colla de Diables de l’Espluga de Francolí.

The lighting of the Devil’s Dance of Cervera, with 14 devils, boosted its outlet Carranquer, and recalled the final lighting of the Foqueral de l’Aquelarre, ending with wheelbarrows and the entrance of Lucifer while the Devil had been burning for some time.
According to the gang leader, Teresa Miret, "It simply came to our notice then, with previous rehearsals to coordinate it also with drummers ”, he commented, and added that “in the end the preparation has borne fruit, we are very pleased with the award ".
The drummers accompanied the devils with the official lighting, the rattle.

Information and image provided by the Cervera Carranquers Devils Group.