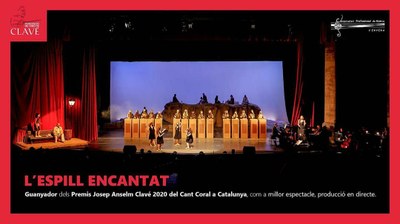 The prestigious Josep Anselm Clavé Choral Singing Awards in Catalonia have made public the list of awards 2020, who have recognized with the maximum award three musical projects of Cervera.

The Clavé 2020 have awarded prizes in a total of eleven categories, three of which have been for Cervera music projects:
The solidarity song “Everything will be fine”, of the Conservatory of Cervera, has won the Jury Prize for Best Video Production Show.
The cantata “The Enchanted Mirror”, composed by Jordi Castellà, has won the Audience Award for Best Live Show Production.
The cantata "The crown of doves", composed by Jordi Castellà, music, and Narcís Turull, letter, has won the Jury Prize for Best Composition.

Two other Cervera projects have received the Honorable Mention as candidates:
The Candies 2.0, of the Cervera Choral Group.
The children's choir Nova Cervera for the trajectory on the occasion of the 50 years of the entity.

The awards are a recognition of excellence·slow musical work being carried out in the city of Cervera.
Many thanks to all the people and entities who are making this possible.

The Josep Anselm Clavé Awards for Choral Singing in Catalonia 2020 will take place on Saturday 22 May, them 17 hours, in the gardens of Montesquiu Castle (Osona) in the framework of the Day of the Hearts of Clavé, if restrictions permit.