Cervera, ready to receive the Kings of the East 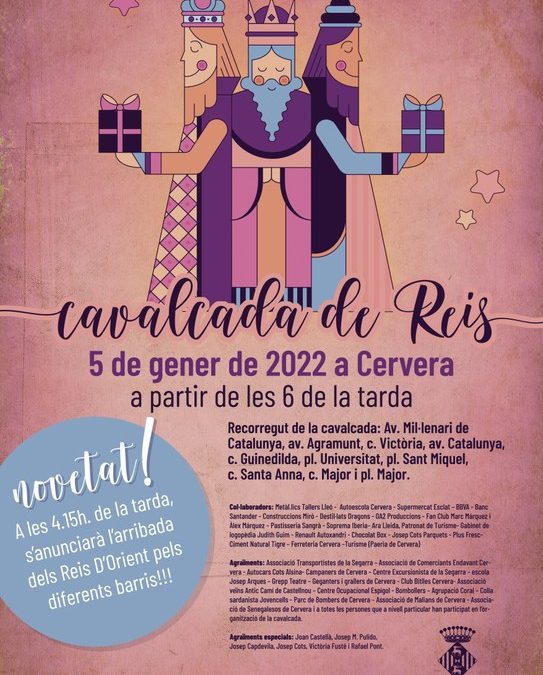 Wednesday 5 January, them 18 hours, the Three Kings arrive in Cervera, which will make its usual route through the city, from Avinguda del Mil·lenari de Catalunya to the Plaça Major.

In the main square you will receive the paer in chief, Joan Santacana, and the councilors of the Municipal Corporation, that they will give them the key to the city that will allow them to open the houses to leave the gifts.

At the 16.15 hours, before the cavalcade, so that everyone can enjoy the arrival of the Kings of the East and the royal pageants, some floats will make a brief tour of different neighborhoods of the city.

Home delivery will take place with the appropriate security measures, without entering the interior of the houses.

On Thursday 6 the Kings will also maintain the tradition of visiting the villages of Vergós and Castellnou, and this year, as a novelty, also the Cardosa. In La Cardosa the reception will be at 11.30 in the square; in Vergós they will receive them at the social venue at 12 hours; and in Castellnou, in the square, them 13 hours.

#BaltasarDeVeritat
The Paeria de Cervera is attached, from 2019, in the #BaltasarDeVeritat campaign, promoted by Casa Nostra Casa Vostra, so that the kings and pageants of the Cavalcades of Catalonia are not people painted black, but they are really black.