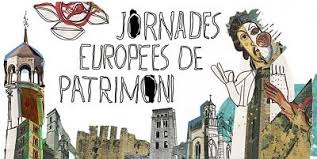 The old library of the University of Cervera welcomed, Monday 7 October, the presentation of the events that are part of the European Heritage Days, promoted by the Department of Culture of the Government through the General Directorate of Cultural Heritage and the Catalan Cultural Heritage.

the Conference, taking place in Catalonia (11, 12 i 13 October), from this year will be linked to the Catalan Capital of Culture. In Cervera include three activities, which are also part of the program Cervera Catalan Capital of Culture 2019. In fact this year the activities of the European Heritage Days in Catalonia will kick off on Friday Cervera output 11, them 18 hours, a route that will present to the public the launch of a website and an 'App' named 'Walk Museum'.

The Catalan Cultural Heritage Department of Culture promotes European Heritage Days (JEP), an initiative of the Council of Europe and the European Commission held continuously in Catalonia since 1991 and is considered the most important European participatory activity in relation to cultural heritage. Hundreds of municipalities and organizations in Catalonia join this festival of cultural heritage.

In this new edition, The Catalan Cultural Heritage gives a new impetus to this event are adding, for the first time, the Cultural Capital of Catalan. Therefore, Cervera, as Catalan Capital of Culture 2019, gives the starting signal for the European Heritage Days in Catalonia with the presentation of the project produced 'Walk Museum. Themed routes Cervera '.

'Walking Museum' is an invitation to walk the streets of Cervera from a new perspective. Mobile technology will allow us to enter unique personal stories of three women hand representing three crucial moments in the history of Cervera. Their voices will accompany visitors to various heritage sites and discover what is hidden inside. Following all the options proposed, can be sensed some episodes of a past that will help us to understand a city in constant transformation.

these routes, planned for all ages and free, follows different points of the city through a unique QR codes, that will give access to different audiovisual content in four languages: Catalan, Spanish, English and French. Audio guides of the three female characters documented centuries XIV, XV and XVIII will discover the medieval past, Jewish Baroque and hidden within the walls of the city today.

The project has a deliberately vindictive character in terms of gender and, for that, the three protagonists are women who not only represent three historical moments, but three social conditions. In medieval times, Margaret was the wife of Mr. Menàrguens slave. Regina, the protagonist of the Jewish Cervera, was part of a prominent family in the city, the Quercia. In the eighteenth century, Ignatius Brach, better known as NASA Tabaco, ran a tavern in the rigid Cervera university. The Web App invites you to follow the journey of requests by the main street of Margaret hand in Menarguens, waivers social awareness which is driven at the Regina widow of Issachar Quercia or ultimately, live the beginning of the course at the University Tabaco own bar Nasa.

The digital tool also provides the "Travel notebook ', with academic and objective explanations of assets; the History Graph ', helping to reconstruct the past of a specific space from photos and / or documents; the 'Gallery of the Museum', kept showing objects from the Museum of the points visited; and other multimedia resources to delve deeper into the matter.

To sum up, i accessible en 4 languages (Catalan, Spanish, English and French), This new tool offers total 26 points of interpretation, with a record total 65 minutes, over 200 audiovisual resources including old photographs archive, contemporary photographs, cabbage pictures·collections of various museums and cultural Catalan (Barcelona, Girona, Manresa, Balaguer, Tarrega…) but also international. videos, 360 pictures, images drone, documents and other materials or newly created result of networking Cervera Museum, which provides, also a display of more than fifty works from his collection·collection (to forecast future updates). The project also includes a large-format signage 4 tour points which, from historical images, will put the visitor in a living.

This is a project of the Museum of Cervera, which has been co·operation of the Catalan Cultural Heritage and has been created by a team of ten professionals from different branches linked to Cervera, Segarra and Lleida. Teamwork and production craft and almost zero kilometer.

Exhibition Craft Baroque. Cervera and the art of his time '

The second part of the weekend's Baroque Cervera ', framed on two activities: exposure Handicraft Baroque. Cervera and the art of his time ' and the concert of baroque music and electronics 'Worm Hole', which is the 4th Dialogue with the World Heritage program Cervera Catalan Capital of Culture 2019.

The exhibition Handicraft Baroque. Cervera and the art of his time ', what open on Saturday 12 in October 12.00 hours, will be open until 12 d'April 2020. Cervera placed as one of the epicentres of the Baroque Catalonia. The exhibition is intended as a first step in the consolidation of Cervera and the museum of the city as a brand and excellent example of a project evaluation and dissemination of Catalonia Barroca.

The distinctiveness of the eighteenth century is indisputably Cervera, the construction of the university and the change meant that, not only in urban but also in the city, and above, for demographic development, economic and artistic. This fact can be considered as one of the most intense chapters of the Baroque era in Catalonia, in this way, the importance of the establishment of the university, reflected in the construction of one of the most important civil architecture of the period, was accompanied by a rise in Cervera society that express themselves through artistic and architectural commission.

Therefore, Cervera is presented as a good example to show the Baroque splendor of a Catalonia that has come blurred by the large losses it has suffered throughout history.

The exhibition 'Artisans Baroque. Cervera and the art of his time 'is curated by Dr.. Francis Miralpeix (professor at the University of Girona and researcher at the Catalan Institute of Heritage) and Dr.. Joan Yeguas (curator of the MNAC), Experts in this period and authors of numerous studies on the subject.

The exhibition is located in the former library of the University of Cervera and its antechamber and is divided into two distinct areas: the workshop of a craftsman of the eighteenth century that evokes a world craft, austere and remote luxury, and the exhibition itself, which takes us to a world of a creative universe from past royal portraits of the Town Council in the sculptures of the great retaulers, through the models and the works of painters Bernard Amoros i Antoni Viladomat.

A total show forty original works neck·private collections, other museums (MNAC, Manresa Museum, Diocesan Museum of Barcelona, Catalan Royal Academy of Fine Arts of Sant Jordi, among other institutions like the University of Barcelona, Residence Castelltort Berenguer Mother Janer Cervera…) and dioceses and parishes (Roman Catholic Diocese of Solsona and Bishop of Urgell), also works the same museum that Cervera, for the occasion, restored twenty works, work carried out and Ramon Pijuan has acquired two original pieces (an Annunciation by Bernat Loving and recorded Antoni Viladomat). Until, with the aim of improving the conservation and, at the same time, the importance of a collective claim·Collections rich but little known.

The exhibition was made possible thanks to the support of the Directorate General of Heritage of the Generalitat of Catalonia and has had numerous col·employees including the Associated Center of the UNED (which has given space Library), INS Antoni Torroja (the prelude), School of Fine Arts (material for the construction of the craft workshop) and the company has sponsored and LEDSC4·museum lighting needed.

“Wormhole”, Baroque music and electronics at the University Auditorium

Worm Hole (literally 'wormhole') is the 4th Dialogue with the World Heritage Cervera 2019. Literally a concept of physics that raises the possibility of connecting, by hotkey, two points in spacetime. Based on this hypothesis, also known as "Einstein-Rosen bridge", Pere Jou artists and Aurora Bauzà (Recent releases have made the Liceu Off, the Dance Biennale de Venecia, at the Santarcangelo Festival in Matera, the European Capital of Culture 2019) We offer a journey without interruption from the early Baroque and the present. In other words: What if the music of the seventeenth century were with the electronic resources of the XXI century?

With a stage show that will occupy all the space of the auditorium and the public with an unusual, countertenor and dancer Pere Jou transit between these two moments of spacetime, metonymically represented on both sides of wormhole Aurora Bauzà for electronics and theorbo Ferran Pisà. Throughout the tour, see how the prism of electronic music gradually enriches, transformed or supplemented Baroque works, opening up a world of infinite sonic possibilities. The reinterpretation of early Baroque repertoire from this perspective of transgression and instrumental timbre, Alloy generate a sound aesthetic unpublished between the XVII and XXI, that will survive even a few weeks in the 4th Dialogue is installed·installed after the concert.

A key element of the proposal is the space where held, the Auditorium of the University, understood not as the place to excel·Excellence Baroque Cerverí, but as the place where the voices and·famous city have resonated for years with their lessons. Take this as part space where the voices of the English Baroque (Purcell), German (Kapsberger), Italian (Frescobaldi the Monteverdi) and French (of visée) will be transformed from the echoes of the contemporary, is the best way to reinterpret and honor XXI- century, from the tangible and intangible heritage of a place emblematic of the city, production in own unpublished Baroque Festival Sparks carried out in co·Working with the Museum of Cervera and Cultural Capital.

Worm Hole is both a concert of Baroque festival Sparks (a festival that links baroque music, their environment and gastronomy). The experience will be completed by chef Sergi Ortiz, the Old Bakery, who played the palate what the audience enjoyed the stage, with accompanying wines from Celler Grau Grau. Tickets can be purchased on the web www.espurnesbarroques.cat