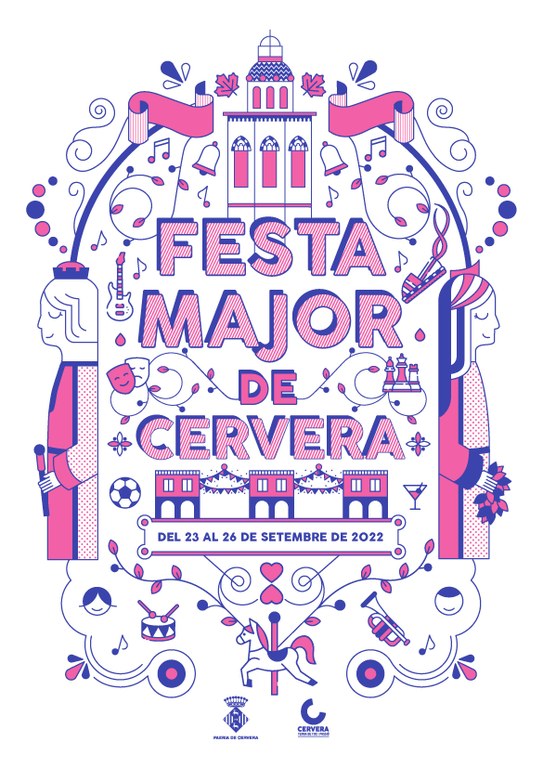 The Festa Major will begin on Friday 23, them 20 hours, with the recognition of two local entities and the proclamation.
The entities honored will be the Segarra Excursionist Center and the Coll de les Savines Scout and Guide Group on the occasion of their fiftieth anniversary. The Municipal Corporation wants to recognize its trajectory and its commitment to sports activity and education in leisure, respectively.
The Pregó will be in charge of the Center Obrer Instructiu d'Union Republicana, in tribute to the popular mobilization that made October 1 in Cervera possible, on the 5th anniversary of the organization of the referendum.

The concerts will take place in the marquee, that this year is installed·the one in Plaça Pius XII with the intention of bringing the festival back to the center of Cervera. The musical offer is varied and for all audiences, with DJ performances at the Festival of the Years 80 i 90, Friday; the Inversend Band groups, The Stomping Pony and Viper, Saturday; and the Costa Brava Orchestra, Monday. All the concerts are free.

The popular culture activities will take the streets again and will recover the usual spaces for the shows and dance shows.
The meeting of giants, which reaches its 40th edition, will make the route from Plaça del Sindicat to Plaça Major, where the dance show and the joint performance of all the gangs will take place.
Later, at the corner of Santa Maria, there will be the extraordinary Carretillada de Cervera Carranquers in charge of the Devil's Ball of Cervera Carranquers.

The small Festa Major, which is held on Monday 26, will set up the festive elements in Plaça Universitat and the parade from Plaça Sant Miquel to Plaça Major, where the performances of the participating groups will take place.

You can consult he program in this link.