Four musical projects from Cervera, nominated for the Clavé Awards 2020 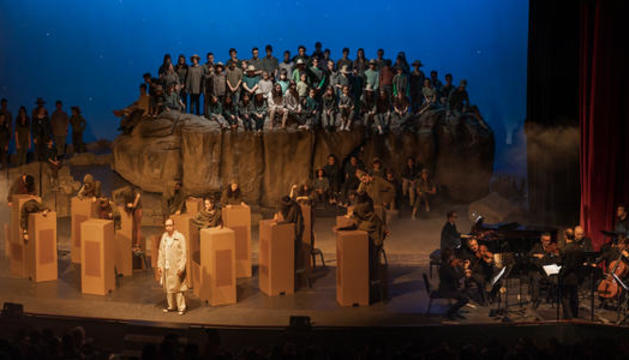 The Josep Anselm Clavé Awards for Choral Singing in Catalonia have made public the list of nominations for the edition 2020, in which four musical projects by Cervera have been chosen: the cantata “L’Espill Encantat”, in the category of best live show; the song "Everything will be fine", as best video production; the “Candies 2.0”, in the candy category (on video or live); and the children's choir Nova Cervera, by the trajectory on the occasion of the 50 years of the entity.

The cantata “L’Espill Encantat” and the music video “Tot anirà” are two initiatives of the Municipal Conservatory of Cervera. According to the director, Estefania Balcells, "Getting these nominations is a great satisfaction".

The other two nominations are for the Nova Cervera Children's Choir, for the “Candies 2.0”, sung from home due to the health situation; and in the Choral Trajectory, for the 50 years of the entity and the project to celebrate this anniversary.

For the children's choir, “We are very happy and happy to be among the nominees for the Clavé Awards 2020, happiness that we share with other choral groups, nominated people and projects, and especially with all the people -singers, principals and families- who are currently or have been part of our association throughout its history ".

From the Paeria de Cervera we congratulate the Conservatory and the Children's Choir Nova Cervera for having achieved these nominations. They are a recognition of his musical work and his ability to adapt to the current situation, with innovative and quality projects.

The Federation of Choir Choirs and the Catalan Choral Movement annually organize and award the Josep Anselm Clavé Prizes for Choral Singing in Catalonia, born on 2019 on the initiative of the Federation of Clavé Choirs with the aim of disseminating and promoting the best works in the choral music scene. The awards, with a national and transversal vocation, they are popularly nominated and are awarded by a jury made up of various professionals linked to the choral world. The Audience Award for Best Production is also given / Show, result of a popular vote.
The awards pay tribute to the musician, poet and politician Josep Anselm Clavé (Barcelona, 1824-1874).

Faced with the impossibility of holding a face-to-face gala, the delivery of the Awards will be on the networks, with an event that can be followed on the MCC YouTube channel on Saturday 6 from June to 18 hours.