The meeting "Lleida Sings to Catalan Culture" will bring together 24 corals, with 650 singers, Cervera 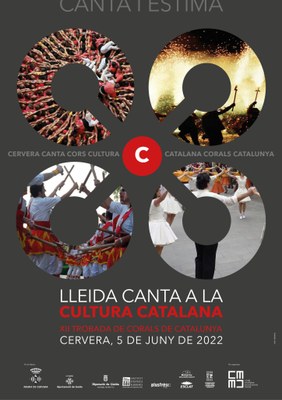 Cervera will convert, Sunday 5 June, in the capital of choral singing in Catalonia on the occasion of the celebration of the 12th meeting "Lleida Canta", organized by the Montserrat Marists Choir of Lleida and the Cervera Paeria.

Details of the day were presented at a press conference, outside the church of Sant Domènec, with the participation of the president of the Diputació de Lleida, Joan Talarn; paer the chief Cervera, Joan Santacana; the Councilor for Culture of Cervera and Member of Parliament, Mercè Carulla, and the representative of the Montserrat Marist Choir, Rose Red.

The President of the Provincial Council, Joan Talarn, He emphasized that "Cervera is one of the cultural centers of the Plana de Lleida and that with events like this it continues to be projected as the cultural capital of Catalonia".

For his part, the paer in head, Joan Santacana, stated that “the event will be a reunion with singing and culture. Cervera will show his heritage and it will be important for the choirs to increase their self-esteem and resume their activity ".

For the Councilor for Culture, Mercè Carulla, “It makes us special·welcome to receive this meeting in Cervera, a city rich in culture where we have three choirs, one of which, the Lacetània Choir, with a long career ”. He thanked the choirs "for keeping the culture alive" and also "all the cultural entities that collect·working with the event ".

Finally, Rose Red, representing the Montserrat Marists Choir, expressed his "gratitude for the good reception of Cervera and all the entities involved". He highlighted "the richness of the city's monumental and cultural heritage".

With the memory of the capital of Catalan Culture of the year 2019, Cervera will host one of the most unique choir gatherings in Catalonia. This is a meeting of singers from all over the West and Catalonia who share a day of brotherhood, of music, of life and love, under the pretext of a discovery, of a call, and which aims to recover the face-to-face gathering; to promote the cultural heritage of choral singing in Catalonia; interact together, choirs and cultural entities, to celebrate life through music; to promote the knowledge between the singers of different choral organizations; as well as involving and adding the associative fabric, cultural, musical and business of Cervera and La Segarra in culture.

11.00 h: Cultural walk through six spaces in Cervera, which provides for displacement, the action of cultural entities, theatrical explanation and the performance of three songs in each place.

14.15 h: Major Cultural Festival, which concludes with a common chanting outside the University.