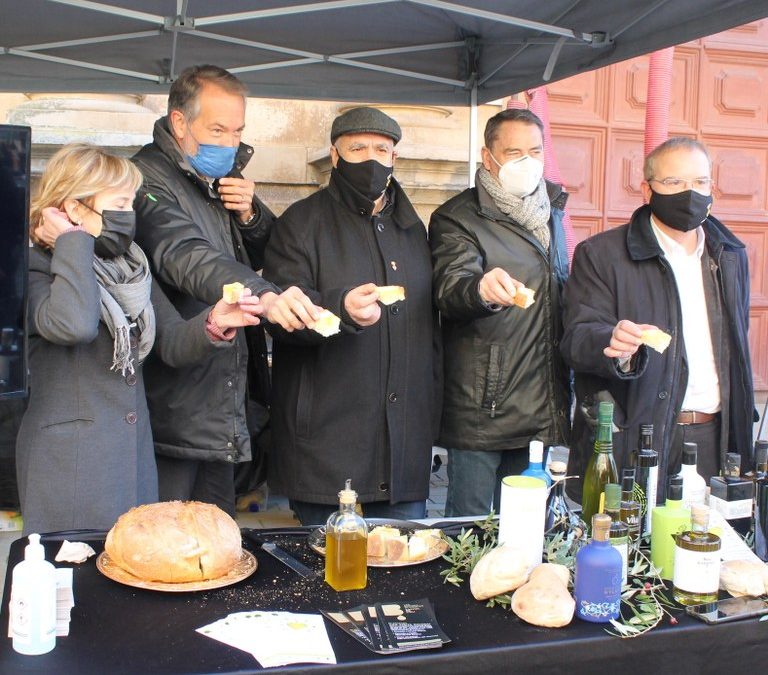 Plaça Universitat de Cervera has hosted the presentation of the twinning between the two competitions, which will materialize on Saturday 22 January, within the events of the 59th Extra Virgin Quality Oil Fair and Les Garrigues, in the Borges Blanques.

The two fairs will participate in joint dissemination projects and col·they will work on its promotion. In this way, the Cervera Bread Fair will have an information stand at the next Oil Fair, which is celebrated next 21, 22 i 23 January.

The twinning was unveiled on Friday 14 January, in an act in the University square, with the participation of the paer in chief, Joan Santacana, and the Councilor for Economic Promotion, Ramon Augé; the mayoress of Les Borges, Núria Palau; the presidents of the Segarra County Council, Francesc Lluch, and the Garrigues, Jaume Setó. The Councilor for Tourism of the Paeria also attended, Roser Segura, and the county councilors for Economic Promotion, Josep Esquerra, and Tourism, Montserrat Farrera.

The Councilor for Economic Promotion, Ramon Augé, has stated that “this col·collaboration represents a new impetus for the Cervera Bread Fair ”and highlighted the synergies between the counties of La Segarra and Les Garrigues, now joined by the canal, and the importance of the agricultural sector ".

For his part, the paer in head, Joan Santacana, He wanted to "highlight the similarities between the inhabitants of the two counties" and thanked Les Borges for "the opportunity it offers us to grow the Cervera Bread Fair and which will be a pride to attend the Oil Fair".

The presentation ceremony ended with a tasting of bread and oil, in which the roles have been exchanged: the mayoress of Les Borges, Núria Palau, he cut the bread and the paer in Cervera's head, Joan Santacana, soaked in oil.

The Cervera Bread and Cereal Fair is scheduled for the days 21 i 22 May 2022, one week after the celebration of the traditional St. Isidore's Day, Sunday 15 May.