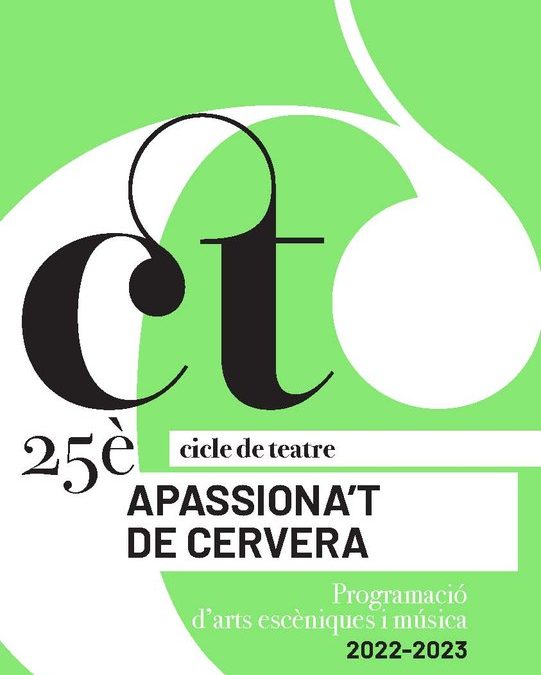 The 25th Cycle "Get Passionate", the programming of performing arts and music organized by the Department of Culture of the Paeria de Cervera, will offer seven shows between September 2022 and May 2023.

The Cycle presents proposals from different genres and for all audiences. As in the previous edition, incorporates a musical show, which will be "The women of my life" with Elena Gadel and Marta Robles.
This year, as a novelty, foresees a dance show, with the renowned choreographer Sol Picó.
The program also includes the successful version of "Terra Baixa", "The wolf", directed by Àngel Llàcer and Enric Cambray; the moving “Nua (Radiography of a disorder), by Anna Perelló and Andrea Ros; the successful drama "The Swallow", starring Emma Vilarasau and Dafnis Balduz; the comedy show "Per fi sol", with Carlos Sans (The Tricycle); and the human comedy "La pell fina", by Yago Alonso and Carme Marfà.

Season ticket sales
The price of the pass for the whole season is 100 euros per 6 functions (the first work, "The wolf – Lowland", is excluded from the subscription).
The sale will take place from Wednesday 21 of September through www.cervera.cat.

Sale of localities
La compra d’entrades anticipades de tots els espectacles es pot fer per Internet als webs www.cervera.cat o www.granteatrecervera.cat.
They can also be purchased at the Gran Teatre de la Passió box office from two hours before the start of the show.
To encourage the attendance of all col·lectius, you can enjoy different discounts such as those that apply to groups of more than 15 people, young people under 18 years, unemployed people, large families or single parents, Youth card, Contents, people with disabilities and more than 65 years.

You can consult the booklet with the schedule in this link.

The season starts on Sunday 25 September, with the representation of "Terra Baixa", them 20 hours, the Grand Theater of the Passion. Link to ticket sale.