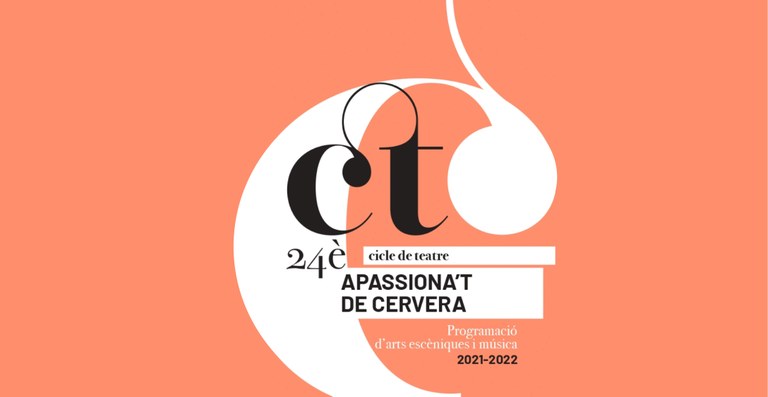 The 24th Cycle "Get Passionate", the programming of performing arts and music organized by the Department of Culture of the Paeria de Cervera, will offer seven shows between November of 2021 and May 2022.

The Cycle includes six functions of professional theater and, as a novelty, a musical show, the Barcelona Gospel Messengers concert, heart that has been able to turn the gospel into a mass phenomenon in Catalonia.

The shows can be seen at the Gran Teatre de la Passió (6 functions) and at the Casal Theater (1), that they recover the 100% of capacity, and still maintain sanitary protocols such as the mandatory use of a mask and hydroalcoholic gel at the entrance.

Consult the booklet with the schedule.

The price of the season ticket for the whole season is € 82 (*except for two works). Season tickets and tickets for each of the works will be on sale from Wednesday 27 October, them 12 hours, a les webs www.cerverapaeria.cat i www.granteatrecervera.cat.

Advance tickets for all shows can be sold online at www.cerverapaeria.cat or www.granteatrecervera.cat.
Tickets can also be purchased at the box office of the Gran Teatre de la Passió and the Teatre del Casal two hours before the show.. There are shows where ticket sales work differently, as is the case of "53 Sundays" and "Sheep".

To encourage the attendance of all col·lectius, you can enjoy different discounts such as those applied to groups, young people under 18 years, unemployed people, large families or single parents, Youth card, Contents, people with disabilities and more than 65 years.

KRÀMPACK
Successful comedy by Jordi Sánchez. The Pau, Xavi and José Luis have decided to go and live together. The apartment has four bedrooms. They need, so, one more person: the Berta. What a problem there is? Berta is Pau’s ex, and Xavi and José Luis like it. Despite this, Xavi and Pau are not going to do a Kràmpack from time to time. Just for fun. A good roll. Roll friend. It's not about sex, nor is it love…. hi what not?
authorship: Jordi Sanchez.
Direction: Pep Anton Gómez Performers: Àlex Ferré, Mikel Iglesias placeholder image, Jaume Casals, Lídia Casanova.
duration: 80 minutes.
Sunday 14 November, 19 hours, the Grand Theater of the Passion.

BARCELONA GOSPEL MESSENGERS
An opportunity to travel from gospel classics to the great pop hits of recent years 40 years, and all from the hand of one of the emblematic groups of the genre.
Direction and authorship: Ramon Escalé.
Low: Isaac Coll Battery: Andreu Moreno.
duration: 80 minutes.
Sunday 9 of January of 2022, them 19 hours, the Grand Theater of the Passion.

FISH LIFE … without thorns!
With a direct and natural language, ironic and funny, two women, Marcia and Lucia, they talk in a waiting room for any consultation. These conversations, which are apparently to pass the time, they drift towards more complex situations. They are surreal conversations and, sometimes, real as life itself: the life of La Marcia i la Llúcia.
authorship: Mercè Comes and Rosa Andreu.
Direction: Mercè Comes.
Performers: Mercè Comes and Rosa Andreu Duration: 90 minutes.
Sunday 6 February (Festa Major), 19 hours, the Grand Theater of the Passion.

FRAGILE
It is a story based on personal experience told as a metaphor for the experience of many people who have experienced cancer up close., either in person or through a family member or friend, and those who will have it in the future… A paradoxical and strange story about the fragility of the human condition. A poetic passage, metaphorical, mythological, through the narrative and representation of two worlds: the outside world ( the body, the visible, the disease…) and the inner world (the struggle for balance and survival…).
Authorship and performer: Ferran Orobitg.
duration: 60 minutes.
Sunday 20 February, 19 hours, the Grand Theater of the Passion.

53 SUNDAYS
Three brothers have stayed for dinner and to talk about their father. The man is old and there are those who think that he cannot continue living alone. It is often lost, he forgets about things and lately has gotten into the bad habit of showing his penis to his neighbor. What was supposed to be a pleasant evening between siblings becomes an endless discussion over three weeks, until…
Direction and authorship: Cesc Gay.
Performers: Pere Arquillué, Cristina Plazas, Àgata Roca and Lluís Villanueva.
duration: 90 minutes.
Sunday 6 March, 19 hours, the Grand Theater of the Passion.

SHEEP
The victor, Alba and Arnau, three brothers from Barcelona, they meet to decide what to do with an unusual inheritance. But they soon realize that what seemed like a gift from heaven can turn their reality upside down. Clinging to lives that do not satisfy them, they will face a decision that will test their sibling relationship. In the end, who is willing to give up anything for a flock of sheep? ‘Sheep’ reflects, in humor, about the frustration of a crisis-stricken generation. How to deal with disappointment and the constant need to reinvent ourselves. Because, really, to want is to be able?
Dramaturgy and direction: Carmen Marfà and Yago Alonso.
Performers: Sara Espígul, Biel Duran and Albert Triola.
duration: 75 minutes.
Sunday 3 d'abril, 19 hours, at the Casal Theater.

CHIMPEAN
The Marc, a trans man from 42 eight-month pregnant years, up to the gynecology consultation, where he has to hold the inquisitive gaze of the rest of the patients. This trigger will make Marc invite us to know his story, returning to be that girl whom they called "marimacho", that teenager who felt watched and hated her breasts. He will go through the moment again when he discovered what his real identity was and we will see him struggling with himself to accept himself., at the same time he will have to deal with the distancing of a father who does not understand him.
Direction: Núria Florensa and Raül Tortosa.
Interpreter: Isidre Montserrat.
duration: 70 minutes.
Sunday 15 May, 19 hours, the Grand Theater of the Passion.