Cervera presents the new “Cinema in the Fog” Series 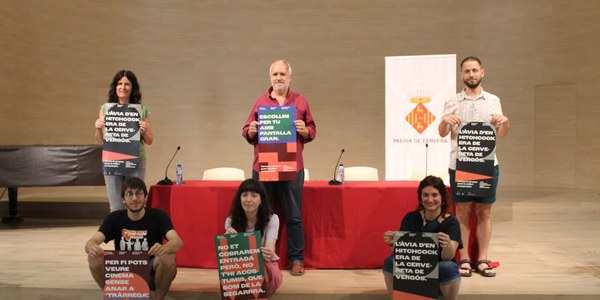 The Departments of Culture and Festivities of the Paeria promote, together with the new cultural association from Cervera Cinema a la Boira, a stable cycle of film sessions, which will combine the projection of hair·films with presentations by professionals from the world of culture.

The first edition of the cycle, which is called "Cinema in the fog", will present four sessions between August and December of 2021, at the Municipal Auditorium, which will be conditioned as a cinema with a large screen (7×5 metres) and an appropriate sound.

"Cinema in the Mist" will begin on Sunday 1 d'agost, with the projection of the skin·movie "The National Shotgun", by Luis G. Berlanga, and a paper with protagonists yet to be confirmed.

The second screening will take place at the Aquelarre festival and will be an open-air session, in the square of Cal Racó. The skin·movie is not yet confirmed, but yes the speaker, who will be the writer, journalist and feminist activist Bel Olid.

The third will be in October, around All Saints, and the last of the 2021, in December, for Nadal.

The presentation of the initiative took place on Friday 18 June, at the Municipal Auditorium, by Joan Santacana, paer in Cap de Cervera, i Alba Bosch, Sergi Moreno and Jordi Boquet, of the Cultural Association Cinema a la Boira.

According to the paer in chief, Joan Santacana, "cinema is a sample of culture that must be in Cervera", and he celebrated that “now it is possible to recover with the form of the Cineclub, a transversal project between the Departments of Culture and Festivals of the Paeria and the hand of three great professionals from the world of cinema ”.

Alba Bosch, Sergi Moreno and Jordi Boquet have presented the program they have thought of, “An attractive project for the public, who can recover the experience col·to go to the movies ”. They thanked the support of the Paeria de Cervera and Circuit Urgellenc.

Cinema in the Fog

Cinema in the fog is an association-film club that was born with the intention of organizing face-to-face sessions that combine great hair·films of film history (both classical and contemporary) with debates presented by renowned figures of Catalan culture. With this series of screenings and talks, Cinema in the fog aims to entertain the brewing public as well as enhance their critical spirit and infect them with our love for·movies.

Cinema in the Fog arrives in the city of Cervera with the aim of bringing unknown works by the best directors in the history of cinema to a general public; carefully selected films, but accessible to any audience; pel·films that raise current issues; works that will make viewers feel that they are learning something new, accessing unknown territories; bringing them closer, definitely, a pel·movies you wish you could watch again for the first time.

In order to enrich the sessions and take them beyond the cinematic experience, the first edition of Cinema in the Fog will feature cabbage·collaboration and the complicity of professionals from the world of culture who will propose the skin·from which they will prepare a paper on topics of general interest.

Cinema in the Fog was born as a project years ago that aspires to recover a stable film circuit in the capital of La Segarra, and which aims to ensure that initiatives such as the Gaudí Cycle or the projection of hair·films on the billboard may have suitable conditions for the public of Cervere and Segarra to enjoy.

Under the title of Choose yours adventure, the cycle 2021 it will consist of four screenings spread over the months of July (inaugural session), August (Aquelarre session), October (All Saints session) and December (Christmas session), which will take place in the Cervera Auditorium, on s’instal·will set up a cinema screen and top-quality sound equipment that will allow viewers to enjoy the best cinematic experience in a privileged setting.

This year's edition will be followed by others in which the public will choose the skins·films and topics to be addressed; and where the cerverine associations will have capacity and will become prescribers and generators of debates that interest the community.

Cinema a la Boira is an association formed by Jordi Boquet i Claramunt, film director awarded the Gaudí Prize for Best Short Film for his work Neither forgetfulness nor forgiveness; Alba Bosch Duran, film producer who has hair on her resume·movies like The daughter of a thief (Belén Funes, 2019), awarded the Goya Prize for best new director, others; Anna Novell Pujol, cultural manager who col·works with the theater company The Pearl 29, led by Oriol Broggi; i Sergi Moreno Castillo, fur producer·movies like Balandrau, frozen hell; The death of William; The The days to come.