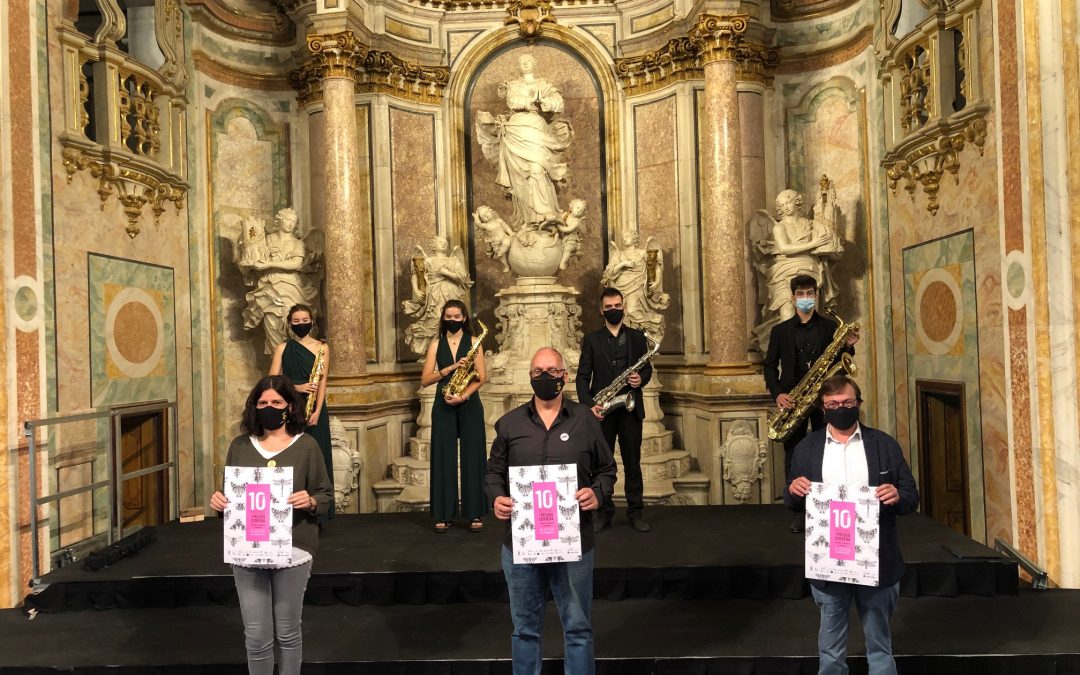 The Easter Festival of Catalan classical music, which reaches its 10th edition, rescheduled for November, between days 14 i 22, when he will offer 8 productions in two spaces: the University Auditorium and the Municipal Auditorium.

The Festival had to be postponed due to the Covid-19 pandemic. The organization of the event, the Town Council of Cervera, it continues to bet on it and will take place in November, coinciding with the dates of celebration of Santa Cecília, patron saint of music.

Musical performances will be concentrated in two spaces: the Municipal Auditorium and the University Auditorium, which will reduce capacity to 50%, with 60 i 140 localities respectively, and all existing health measures will be taken.

Presentation of the Festival

The University Auditorium has hosted the presentation of the 10th edition of the contest, Tuesday 20 October, in an act addressed to the media that has been in charge of the paer in chief, Joan Santacana; Councilwoman of Culture, Mercè Carulla; and the Festival Director, Josep M. Sauret. Abans de les seves intervencions, a brief performance by Delia Quartet took place, saxophone quartet from the Liceu Conservatory that will take part in the Easter Festival.

The chief paer, Joan Santacana, he highlighted “the work of Xavier Puig, founder and first director of the Festival, who organized it because he believed that the Catalan music sector needed cohesion, projection, dialogue and landscape ”. According to Santacana, "We can say that this goal has been achieved and that the Festival has been consolidated, reaching its 10th edition this year".

Mercè Carulla, Councilor for Culture, he stated that “it is necessary to program cultural activities and that the Paeria de Cervera is committed to it, as demonstrated this summer with the organization of the Festiuada, the Isagoge and the Festa Major ”. "Culture is safe and the Easter Festival will also take all health measures". Finally, he emphasized “the importance of the beer contest, which has the qualification of strategic by the Catalan Institute of Cultural Enterprises (ICEC) the Government, that contribute 40.000 euros (he 50% of the budget)”.

Programming of the 10th Easter Festival

The opening concert will be on Saturday 14 of November and will serve to celebrate the 10 years of the contest. It will be conducted by the Catalan Chamber Orchestra, with the direction of Josep Pàmies. It will review the legacy of Pau Casals and serve to pay tribute to his musical and social heritage. This is a production of the festival where he will also perform as a soloist, Carla conangla.
Sunday 15 the ‘Danses del Segre’ concert has been scheduled, with the Julià Carbonell Symphony Orchestra, a concert that will evoke images of the course of the river Segre, from its birth in the Pyrenees to ending up in the plain of Lleida.
Friday 20 “Sacred and Profane” arrives, a concert that will consist of a selection of motets by Pau Casals, by the Ginesta Choir and Marc Castellà (piano).
Saturday 21, “The integral of the sardanas of Pau Casals”, a càrrec de la Cobla de Cambra de Catalunya, than for the first time at a public hearing, will perform the work of compiling the sardanas of Casals.
Also on Saturday 21 there will be a pairing of wines with the music of Toldrà and poems by Carner.
Sunday 22 November will be the turn of a recital by Alba Ventura, who will present the Notebooks of the “Iberian Suite” by Albéniz.
As for local concerts, they will be the 14 November, with the “Manuscript of Cervera”, where you can discover these unique documents found in the Regional Archive of La Segarra; and the 15 November, amb els Joves Talents del Liceu, a saxophone quartet.

More information and ticket sales on the Festival website: www.festivalpasqua.cat