Change of show in the Theater Cycle 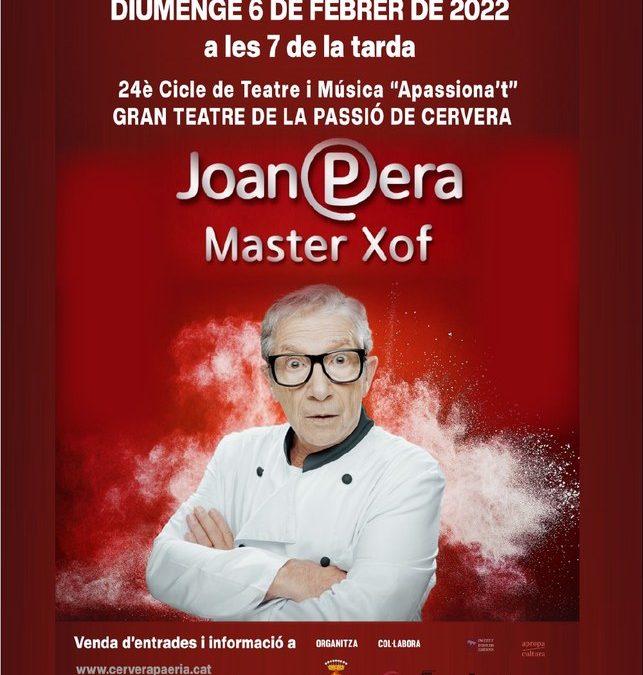 The function “Fish life… without thorns ”, by Mercè Comes and Rosa Andreu, scheduled for the day 6 February, had to be suspended, for reasons beyond the control of the organization, and "Master Chef" has been programmed in its place, by Joan Pera.

It will be the third performance of the 24th Cycle of theater and music “Apassiona’t de Cervera, organized by the Department of Culture, and which includes seven shows between November 2021 and May 2022.

The performance of "Master Chef", with the popular comedian Joan Pera, will be part of the program of the Festa Major del Santíssim Misteri.

A “Master Xof”, Joan Pera, owner and head chef of La Perdiueta Eixerida, he just found out that his family wants to close and sell the restaurant on the pretext of a retirement he never wanted. Angry and disappointed, he locks himself in the kitchen and decides, without anyone's help, prepare a particular and fun tasting menu to show that you are still fit.

The Cycle includes six functions of professional theater and, as a novelty, a musical show.

The shows can be seen at the Gran Teatre de la Passió (6 functions) and at the Casal Theater (1), respecting the health protocols in force at any given time.

Behind the stove, with sympathy, between laughter and complicity, el nostre Master Xof will prepare a menu for all of us that everyone likes… But tonight, i by surprise, there will be two mysterious diners who will take him by the thumb. He will have to retire or continue to be the cook of laughter for life?

It is a story based on personal experience told as a metaphor for the experience of many people who have experienced cancer up close., either in person or through a family member or friend, and those who will have it in the future… A paradoxical and strange story about the fragility of the human condition. A poetic passage, metaphorical, mythological, through the narrative and representation of two worlds: the outside world ( the body, the visible, the disease…) and the inner world (the struggle for balance and survival…).

Three brothers have stayed for dinner and to talk about their father. The man is old and there are those who think that he cannot continue living alone. It is often lost, he forgets about things and lately has gotten into the bad habit of showing his penis to his neighbor. What was supposed to be a pleasant evening between siblings becomes an endless discussion over three weeks, until…

The victor, Alba and Arnau, three brothers from Barcelona, they meet to decide what to do with an unusual inheritance. But they soon realize that what seemed like a gift from heaven can turn their reality upside down. Clinging to lives that do not satisfy them, they will face a decision that will test their sibling relationship. In the end, who is willing to give up anything for a flock of sheep? ‘Sheep’ reflects, in humor, about the frustration of a crisis-stricken generation. How to deal with disappointment and the constant need to reinvent ourselves. Because, really, to want is to be able?

The Marc, a trans man from 42 eight-month pregnant years, up to the gynecology consultation, where he has to hold the inquisitive gaze of the rest of the patients. This trigger will make Marc invite us to know his story, returning to be that girl whom they called "marimacho", that teenager who felt watched and hated her breasts. He will go through the moment again when he discovered what his real identity was and we will see him struggling with himself to accept himself., at the same time he will have to deal with the distancing of a father who does not understand him.